As capnproto-rust approaches full feature support for Cap’n Proto serialization, now is an apt time to validate its usefulness on a slightly more involved example.

Thus I present zmq-explorers, a toy data pipeline which uses ZeroMQ as a transport layer. 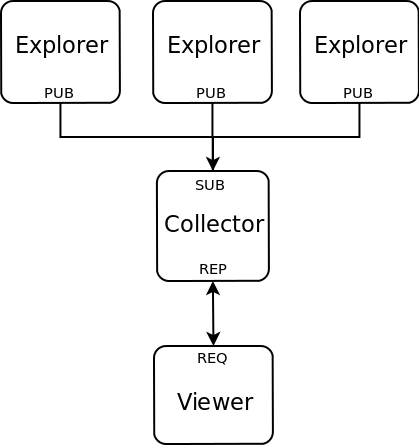 At the input end are any number of “explorer” nodes gathering data. In the middle is a “collector” node aggregating and processing the data. At the end is a “viewer” node consuming the processed data. The explorers communicate to the collector via a publish/subscribe pattern, and the viewer communicates with the collector via a request/reply pattern. ZeroMQ makes this communication quite simple to express, and Cap’n Proto operates directly on the bytes moved by ZeroMQ — no copying or parsing is necessary.

Concretely, the observations of the explorers are color values from an image:

Each explorer randomly moves within the two-dimensional space of the image, reporting the colors it observes, fudged by some noise.

The collector maintains a grid that aggregates the reported observations:

The collector sends its current grid to the viewer whenever it is requested.

Here is what the viewer might see if there are three explorers: